On 1 January 2017, Metro will introduce a number of changes to its fares, including an annual fare increase.

Fares will increase by between 10 and 20 cents for urban passengers and 10 and 90 cents for non-urban users.

At the same time, in line with the recently gazetted Metro Fares Order 2016, Metro will introduce a new zone based urban adult fare structure, replacing the existing complex section based system.

Urban adult fares are currently based on the number of sections a journey involves: Short (1-4 sections), Medium (5-10) or Long (11-15 sections). The new zone based system means urban adult passengers will purchase tickets based on how many zones they travel within: 1 Zone, 2 Zones, or All Zones. Student and concession passengers will continue to pay a flat rate regardless of the number of zones travelled.

Metro Chief Executive Officer Stuart Wiggins said: “The change to urban zones is designed to make catching a bus easier to understand, and ensure we have a fare structure that is more relevant for contemporary Tasmanian public transport networks.

“When purchasing a ticket it will be clear how many zones a passenger is going to pass through and the use of easy to understand visual maps will make purchasing the correct ticket a simpler exercise.

“Metro is committed to providing a transport system that is equitable and meets the needs of the majority of the travelling public and this reform is a key part of meeting these aims now and into the future.

The new fare structures are below: 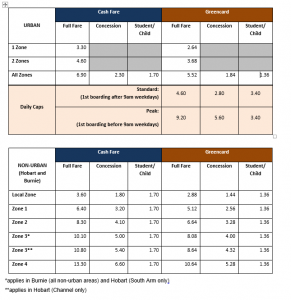 Mr Wiggins said with the successful implementation and growth of Greencard, the time was right for Metro to address the inherent complexities of its legacy systems.

“Using Greencard still provides a 20 per cent discount on fares, free transfers in the urban area, and low caps on the cost of daily travel. Those still not yet using a Greencard are encouraged to start enjoying the most cost effective travel available.

Maps of the new urban adult fare zones are attached.