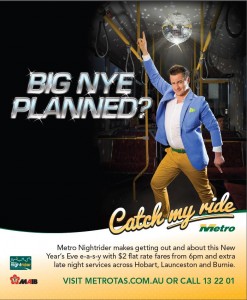 Metro Tasmania in conjunction with the Motor Accidents Insurance Board are once again running the very popular Nightrider bus services on New Year’s Eve in Hobart, Launceston and Burnie for a flat cash fare of just $2.

Metro’s Chief Executive Officer Stuart Wiggins said today the Nightrider services were designed to get people easily and safely to and from New Year’s Eve festivities.

“Metro, MAIB and Tasmania Police are encouraging people to leave their cars at home, take a bus to the festivities, enjoy themselves, then catch a bus back home for a flat fare of just $2 each way,” Mr Wiggins said.

“This year, in response to feedback from Metro passengers, we’ve decided to re-locate the Nightrider bus stops nearer to Royal Park to make it even more convenient for people to catch a bus home after New Year celebrations in Launceston,” Mr Wiggins said.

The $2 flat cash fare would apply to all Metro services from 6.00pm on New Year’s Eve to the last services at 2.30am on New Year’s Day in Hobart and 1.30am in Burnie and Launceston.

In past years the late night New Year’s services have proven to be very popular with people taking advantage of the low cost public transport offer.

“These services are great for revellers, helping them to enjoy the festive season without the need to worry about parking or finding a ride home,” Mr Wiggins said.

Importantly, the “Nightrider” services also have broader safety and community benefits. The aim is to reduce the number of injuries and deaths on our roads caused by alcohol and drug-affected drivers by offering an accessible, cheap alternative to driving following festive celebrations.

It also helps to alleviate pressure on Tasmania Police, the Ambulance Service, other emergency services and medical facilities by enabling the safe and efficient transport of large crowds.

MAIB Chief Executive Officer Peter Roche said that the MAIB was pleased to again be involved with this important safety initiative and encouraged the public to avail themselves of the service.

Nightrider services from Launceston will depart from Royal Park and the Launceston Interchange in St John Street.

Nightrider services from Burnie will depart from the Burnie Interchange in Cattley Street.

As well as departing from the Hobart /Franklin Square Interchanges, Hobart Nightrider services will depart from three special bus stops including: For timetables of services view our detailed alert by clicking here. Timetables will be available from 26 December 2014.