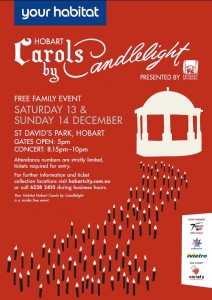 Metro Tasmania is pleased to continue its partnership with Hobart City Council in supporting Carols by Candlelight and offering patrons a FREE, convenient and safe alternative to driving to the event.

Transport to and from the Carols on Saturday 13 December

Upon presentation of your Your Habitat Hobart Carols by Candlelight ticket to the driver, patrons can travel FREE on any Metro Tasmania route to Hobart City between 4pm and 8pm, and any Metro Tasmania route from Hobart City between 9.30pm and 11pm. Metro’s Saturday timetable will be in operation to transport patrons to and from the event, and services will operate via their normal routes. Patrons travelling to Northern Suburbs and Eastern Shore destinations after the Carols will need to walk to the Elizabeth Street Bus Mall to catch their applicable service. Patrons travelling to Sandy Bay, Dynnyrne, Taroona, Kingston & Blackmans Bay will be able to catch Metro services from the bus stops in Davey Street between Murray Street and Salamanca Place.

Transport to the Carols on Sunday 14 December

Upon presentation of your Your Habitat Hobart Carols by Candlelight ticket to the driver, patrons can travel FREE on any Metro Tasmania route to Hobart City between 4pm and 8pm.

Transport from the Carols on Sunday 14 December

Metro’s normal Sunday services have ceased operating by the time the Carols are scheduled to conclude. To cater for Carols’ patrons, Metro will operate free services on a number of key routes at the conclusion of the programme. These services will depart at 10.15pm from Davey Street between Murray Street and Sandy Bay Road as follows:

Free Park and Ride facilities allow you to leave your car and take conveniently located public transport to complete your journey into the city, eliminating the hassle of finding a park in such a busy time of year. Patrons wishing to use Park and Ride services can use the locations available at Bilton St Claremont, Glenorchy City Council Car Park (Barry Street near Interchange) and Metro Springfield.